Health in all policies and equity : realising the challenge : a discussion paper for the Equity Action Project 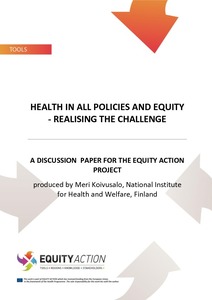 The necessity to focus on equity and Health in All Policies has been reiterated as part of Council conclusions in 2006, 2010 and 2011, which in 2011 emphasised that:
“A ‘Health in all policies’ approach with an equity focus should be used in specific policy areas and coordinated activities that have the greatest health impact contributing to reducing the persisting health gaps. This might include health, education, research, environment, agriculture, economy, employment and social policies.”
As well as called European Commission and Member States to:
“Promote the effective implementation of ‘Health in all policies’ approach with an equity focus, to encourage and coordinate all relevant sectors in playing their part in reducing healthgaps within the EU.”
However, the practice of how this should be done has remained more elusive. There is no guidance, practice or training of how to implement Health in All Policies and even less for potential avenues in to address equity in this context. This paper seeks to provide some guidance on potential options in the light of existing practices in HIAP as well as knowledge on equity in the context of public policies.
We have substantial literature on equity and reducing health inequalities as part of public policies and interventions, however tackling equity as part of HIAP often remains unclear and a further challenge. The purpose of this paper is to focus on current potential and prospects of tackling equity as part of Health in All Policies (HIAP) approach. The paper i) first elaborates what is HIAP and how equity is understood in the context of HIAP, then focuses on ii) the state of current knowledge in relation to HIAP and equity, iii) strategic thinking on HIAP and equity, iv) existing tools and mechanisms for enhancing equity as part of HIAP, v) the role of HIAP as part of political decision-making, vi) needs and scope for capacity building in the area, vii) case studies of relevance to understanding the potential and scope for HIAP, and finally viii) discusses potential and scope for equity focus in HIAP at local, national and European level policy making and ix) concludes and suggests potential agendas for action. at European Union level.