From early exit culture to the policy of active ageing: the case of Finland 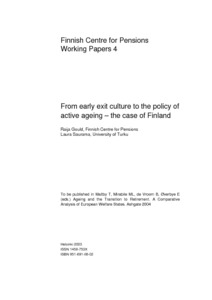 The policy that prefers pre-retirement pensions has changed into a policy that encourages continued participation in working life. The change in the early exit programs has been accompanied by a change in the social and political environment, creating a growing consensus on the importance of increased longevity in working life. The notion of early exit as a social right has shifted to a paradigm which highlights work as a duty in an individually flexible context.

The article reviews the Finnish welfare state policy concerning the relationship between ageing and work. The different phases in the development of early exit arrangements and subsequent programmatic changes, which culminated in the pension reform, are outlined. Furtermore, various national work promoting programmes are reviewed. Besides analysing policy lines, the outcome of the early/late exit policy is also looked at from the perspective of the individual.