Genetics of Sleep - Sleep and Comorbidities - Connection at the Genetic Level 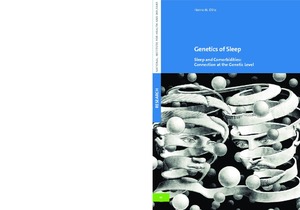 Sleep has inspired artists and scientists for centuries, and still despite considerable efforts of the scientific community, it is unknown why we sleep. Insufficient sleep is a risk factor for psychiatric and somatic diseases. In terms of sleep research, genetic studies may be used to locate the genes controlling sleep and elucidate the connection of sleep with diseases. This thesis aimed to find common genetic variants that control sleep. In addition the thesis aimed to study the role of sleep in somatic and psychiatric diseases at the genetic level. Genetic and functional methods were combined to analyze the normal variation in sleep duration in Finnish population and in patients and consequences of sleep loss in a controlled environment. The results provide evidence of KLF6 in regulation of sleep and sleep loss, CDH7 with the regulation of sleep duration, cognitive task performance and bipolar disorder, and evidence of TRIB1 in regulation of blood lipid levels and sleep duration. The findings suggest a shared genetic background for regulation of sleep with somatic and psychiatric disorders. The common genetic factors may partly explain why insufficient sleep is connected with somatic and psychiatric diseases.