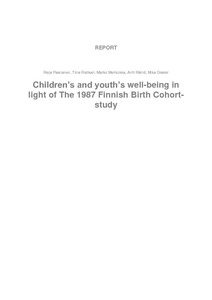 Well-being in later life is founded in childhood. When speaking about problems among young people, quite often it is forgotten that health inequalities and social exclusion are phenomena that root themselves in earlier life events. Genetic heritage together with family- and social circumstances shape people and spiritual-, social-, financial- as well as cultural resources get passed on through generations. Societal support for well-being should begin early, as attachment to society begins already at birth, if not already in the womb. The processes of social exclusion should be countered even before actual problems occur, as we know that those with the least resources due to, for example, handicaps, ill-health or parental problems have the highest risk of exclusion.

The 1987 Finnish Birth Cohort -study follows all, approximately 60 000 persons born in the year 1987, from the prenatal period through the year 2008, using official registers collected by Finnish authorities. The study has found that disadvantage transfers through generations, and inequality is a widespread and multifaceted societal challenge. While most of the Finnish youth is doing very well, there is a notable group of children and young people who need support in attaching to the society.

The study has thus far shown that of those born in the year 1987, before the age 21, one fifth has received specialized psychiatric care or medication for mental health problems. Approximately 18 percent of the cohort members have completed only primary education and of them 40 percent have mental health problems. Social support assistance has been received by 23 percent of the cohort members, and 26 percent have a record in the police or judicial registers for a misdemeanor or for a sentence. Approximately three percent of the cohort has been placed in out-of-home care. Problems in well-being, such as lack of secondary level education, mental health- and financial problems accumulate and parental difficulties influence children’s later well-being.

The birth cohort 1987 grew up- and was raised during the recession of the 1990s, when unemployment and financial difficulties were faced by a large number of families. Political decisions made during that time have an impact still today. Services designed for children and families were reduced significantly and preventative work was compromised. School health check-ups and prenatal care visits were cut, and services provided to the homes of families with children were made obsolete, at the same time when cuts were made to the resources of schools and kindergartens. Even today the preventive- and welfare services of municipalities have not caught up to the pre-recessions levels and the use of corrective services increases constantly. The current systems of service production meet the real needs of the citizens poorly, as problems today are often multidimensional and the sectorally divided service system fails at creating a holistic picture of the clients’ needs.

The purpose of this report is to give an overview of the well-being of today’s young people and outline the factors that impact the development of well-being in later life. This research aims also at providing information about which preventative and corrective efforts should be emphasized. Children’s well-being is founded on the well-being of families and other developmental environments such as childcare, school and hobbies can serve to ease the functioning of the everyday life and support family welfare.