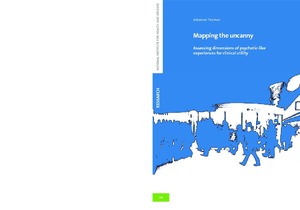 Psychotic diseases are a great burden to both the affected individuals and society at large. Though psychoses are severe mental disorders, similar phenomena appear outside of the diagnosable disorders as psychotic or psychotic-like experiences (PLEs). The PLEs are on a continuum of liability and symptom expression in the population, from the healthy to the pathological, and the diagnosed disorders constitute the extreme of the distribution, rather than a clearly delineated class. Studying the psychosis continuum offers a way of understanding the underlying causes shared across the entire range. The frequent presence of PLEs before the first psychotic episode also helps in identifying a trajectory towards disease. However, the specific PLEs associated with increased psychosis risk or incipient disease require further elucidation. Though experiences similar to the positive symptoms of psychosis primarily hallucinations and delusions have been nominated as the most predictive of psychosis, these are broad categories that may contain subdivisions of varying levels of shared aetiology with psychotic disease, and varying predictive value.

In this thesis, the latent dimensions of self-reported PLEs were explored in one sample of 6,611 adolescents and one sample of 31,822 adults from the general population (Studies I and II), as well as in one sample of 71 and one sample of 731 adolescents in psychiatric care (Studies III and IV). Three different PLE questionnaires were employed in the separate studies: the PROD-screen, the 92-item version of the Prodromal Questionnaire, and the positive items of the Community Assessment of Psychic Experiences. The clinical significance of the identified dimensions was studied via their associations with general mental health, cognitive performance, and their predictive value with respect to psychiatric hospitalization in general or for psychosis specifically.

Overall, the results showed a general PLE structure of positive, negative, and disorganized dimensions similar to that of symptoms in non-affective psychotic disorders. The positive dimension further subdivided into dimensions of persecutory ideation, other delusions, and hallucinations and, in one study, depersonalization experiences. These dimensions were correlated with general psychiatric health, as assessed by lifetime depression and anxiety. In contrast, questionnaire items intended to address hypomanic, grandiose, or magical thinking appeared unrelated to psychiatric health. In a smaller sample of adolescents in psychiatric care, the positive, disorganized, and negative dimensions were not associated with cognitive performance, contrary to expectation. However, in a larger sample, especially functional disorganization, that is, impaired role functioning, was associated with later psychiatric hospitalization in general, while the depersonalization experiences dimension was the best predictor of hospitalization with a diagnosis of psychosis.

The identified latent dimensions of psychotic-like experiences demonstrate the structural validity of the PLE questionnaires, while the concurrent clinical correlates and predictive value establish criterion validity. In particular, the finding of the empirically derived depersonalization dimension being specifically predictive of psychosis merits attempts at replication. Modern psychometric methods used in the present thesis improve the utility of PLE related rating scales. In future studies a more fine-grained approach to assessing PLEs is recommended, in order to improve the accuracy of psychosis prediction and our understanding of the psychosis continuum.