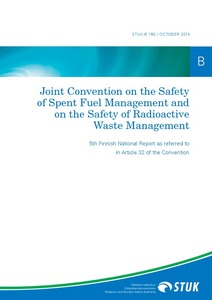 This is the Finnish National Report, in accordance with the provisions of Article 32 of the Joint Convention, for the Fifth Review Meeting of the Contracting Parties in May 2015. The fulfilment of the obligations of the Convention and the developments of waste management after the Fourth Review Meeting, during the reporting period 2011–2013, are assessed in this report. It presents the recent developments and describes the waste management facilities and practices in Finland, to be reviewed and discussed by the contracting parties.

As spent nuclear fuel is defined in the Finnish legislation as radioactive waste, the nuclear power plants at Loviisa and Olkiluoto are the main generators of radioactive waste. Fortum Power and Heat Oy operates two VVER units at the Loviisa site and Teollisuuden Voima Oyj two BWR units at Olkiluoto. The Loviisa units 1 and 2 were commissioned in 1977 and 1981, and the Olkiluoto units 1 and 2 in 1978 and 1980, respectively. In addition, a new nuclear power plant unit is being constructed at the Olkiluoto site. As to the future, the Decision-in-Principle, the first step in the licensing process, was made by the Government for two new reactors in 2010, one for Teollisuuden Voima Oyj at the Olkiluoto site and one for Fennovoima Oy, for which Pyhäjoki was chosen as the site in 2011. At the Olkiluoto and Loviisa sites there are interim storages for spent fuel as well as repositories for low and intermediate level radioactive wastes. Furthermore, a Triga Mark II research reactor is operated in Espoo by VTT Technical Research Centre of Finland. However, in 2012 VTT decided to start planning of the decommissioning and eventual shut-down of the research reactor, due to economical reasons.

The four Finnish NPP units operated during the reporting period safely with high capacity factors and generated spent fuel accordingly. The generation of low and intermediate level radioactive waste was kept low. Activities and programmes related to waste management continued in accordance with the national strategy, milestones and timetable. The licensees and Posiva Oy, the spent fuel disposal implementer, showed good safety performance and safety management practices in carrying out their responsibilities in spent fuel and radioactive waste management.

The main focus of activities during the reporting period was the spent nuclear fuel disposal project. The construction licence application including the safety documentation for the spent nuclear fuel encapsulation and disposal facilities was submitted to the authorities at the end of 2012. Posiva Oy is aiming to start disposal operations around 2022.