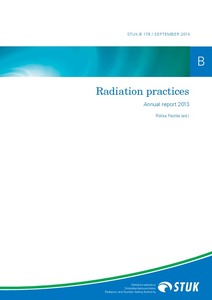 1994 safety licences for the use of radiation were current at the end of 2013. 1632 responsible parties (parties running a radiation practice) were engaged in notifiable licence-exempt dental X-ray activities. The use of radiation was controlled through regular inspections performed at places of use, test packages sent by post to dental X-ray facilities and maintenance of the Dose Register. The Radiation and Nuclear Safety Authority (STUK) conducted 494 inspections of licensed practices in 2013. 718 repair orders and recommendations were issued during the course of inspections. Radiation safety guides were also published and research was conducted in support of regulatory control.

A total of nearly 11 600 workers engaged in radiation work were subject to individual monitoring in 2013, and about 145 000 dose entries were made in the Dose Register maintained by STUK.

In 2013, regulatory control of the use of non-ionizing radiation (NIR) focused particularly on lasers, sunbeds, radio appliances and cosmetic applications producing non-ionizing radiation. A total of 57 cases of sales or importation of dangerous laser devices were found in regulatory control. The number of show laser on-site inspections was nine. Three sunbed facilities were inspected. In addition, the municipal health protection authorities submitted the details of the inspections of 40 sunbed facilities to STUK for evaluation and decision. In the market control of wireless communication devices, 11 device types were tested, of which nine were mobile phones and two wireless modems. The regulatory control of cosmetic NIR applications intervened in the practices of cosmetic and tattoo removal service providers ten times.

In metrological activities, the demand for irradiation and calibration services increased notably compared to previous years. Metrological standards were maintained to the calibrations of the radiation meters for radiotherapy, radiation protection and X-ray imaging. STUK’s metrological laboratory was found to be well within the acceptable variation of results in the measurement comparison.

There were 123 abnormal incidents related to radiation use in 2013. Thirty-four of the cases dealt with the use of radiation in industry, research and education, 87 with the use of radiation in health care and veterinary medicine, and two with non-ionizing radiation. One of the incidents had severe consequences, as an employee of a company producing radiopharmaceuticals was exposed to iodine-131. The incident was rated as a level 2 incident with significant safety impact within the INES classification scale.