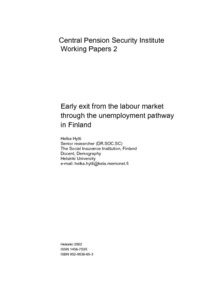 In the 1980s, utilization of the unemployment pathway in a given branch depended primarily on how open the branch was to international competition. In the early 1990s, the rate of exit was highest in the branches with primarily a domestic focus, which were hardest hit by the recession. The exit rates were remarkably high also in the previously public-sector branches recently opened to competition. After the recession, in 1996-1998, adjustments to international competition seemed to explain a great deal of early exit behaviour through the unemployment pathway.

The focus of the study is on patterns of early exit from the labour market in Finland, with a special emphasis on the unemployment pathway. The period under review extends from the early 1980s to the turn of the century. The data for the study was obtained from individual-level files formed by combining census data with statistical registries of social security. The results are interpreted primarily from the point of view of the connection between early exit, increasing economic openness and structural change in society.