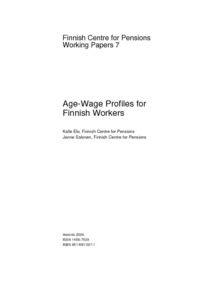 In this age-wage profile survey, we have modelled and forecasted the development of wages by age. The data of the survey consists of the wages of 18–60-year-old men and women insured under the Employees' Pensions Act with the major earnings-related pension providers. The data covers the years 1996–2001 and represents 70–95 per cent of the wages insured under the Employees' Pensions Act during this period.

According to the results, the trend following the recession in the early 1990s will continue for women during the next few years. Young women under the age of 30 will lag behind to some extent from the general income level index trend. For other women, the wage trend will surpass the general income trend.

Women are slowly but surely catching up with the men in the wage trend.