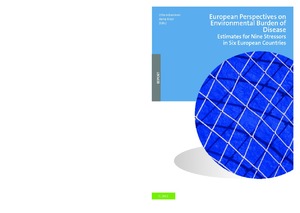 The highest environment-related health benefits can be expected from policies that efficiently target environmental exposures having high contributions to the burden of disease (BoD) in the population. Such benefits are demonstrated for example by the smoking bans in public places that have shown significant population health improvements in many European countries. However, the health impacts of environmental stressors range from relatively mild psychological effects like annoyance to effects on morbidity such as asthma, cardiovascular diseases, cancer and premature mortality. This diversity of health effects challenges the comparison of the impacts of alternative policies.

The objectives of the multinational European EBoDE-project (Environmental Burden of Disease in the European region) included updating previous environmental burden of disease (EBD) assessments, identifying stressors relevant for the European region, testing a harmonized EBD methodology in the participating countries, and developing and making available the methodology for other countries. The project has assessed the environmental burden of disease related to nine selected stressors across six countries: Belgium, Finland, France, Germany, Italy and the Netherlands. The assessed stressors were: benzene, dioxins (including furans and dioxin-like PCBs), non-smokers exposure to second-hand smoke, formaldehyde, lead, transportation noise (including road, rail and air traffic), ozone, particulate matter (PM2.5) and radon. The stressors were selected based on their public health relevance, potential for high individual risks, public concern and/or large economical impacts.

The environmental burden of disease is expressed in Disability Adjusted Life Years (DALYs), which are a summary measure of population health combining mortality and morbidity. Calculations were based on the most recent scientific evidence concerning population exposure and health effects, national exposure data and WHO burden of disease data.

Even though the most recent scientific knowledge and data were used, many uncertainties and controversies remain. Results give only a crude ranking of environmental health impacts and need to be interpreted with caution. The results suggest that 3–7% of the burden of disease1 in the participating six countries is associated with the selected nine environmental stressors. Particulate matter (PM) is estimated to be associated with the highest disease burden (6 000 to 10 000 DALYs per million people2), followed by second-hand smoke, traffic noise and radon.

Burden of disease estimates quantify the attributable health impacts of environmental exposures. However, due to background exposures from natural sources and practical limitations in removing anthropogenic pollution, the total attributable burden of disease cannot be directly interpreted as reduction potential. EBD estimates can be used to identify areas of high disease burden for more detailed analysis of the reduction potential by targeted policies. Quantitative methods like EBD and health impact assessment should be used to inform policy makers about the health benefits of specific policy measures.