The cost of illness of the working-age population in the Nordic countries in 2012 : A comparison to 1991 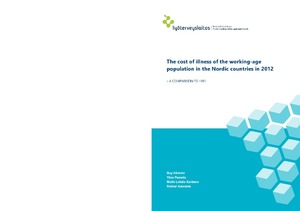 The cost of illness of the working-age population in the Nordic countries in 2012.pdf (1.939Mt)
Lataukset:

The cost of illness in 2012 of the working-age population for four Nordic countries was calculated in monetary terms, and compared with equivalent data for 1991. On average, the costs have slightly increased in two decades, calculated as euro per labor force per year. The costs of mental helth problems in particular have increased, whereas the costs of musculoskeletal and circulatory diseases have fallen. The observed general increase in early retirement costs may be due to methodological differences. The highest increase in early retirement costs were observed in Denmark. Norway has the highest cost level.