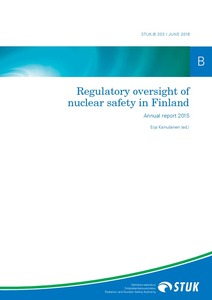 In 2015, all Finnish nuclear power plants operated safely and caused no danger to their surrounding environment or employees. The collective radiation doses of employees were yet again historically low and the radioactive releases into the environment very small. The low employee radiation doses were the result of short annual outages and improvements implemented at the nuclear power plants.

Over the course of 2015, Fortum Power and Heat Oy (Fortum) submitted to STUK a total of 13 operational event reports. The operational events did not compromise nuclear or radiation safety. STUK performed an annual outage inspection in compliance with the inspection programme. In this inspection, STUK oversaw the repairs of the primary circuit reactor coolant pumps, in particular. The pumps and the wearing of their spare parts will be reviewed as part of the ageing management inspection in 2016. In 2015, STUK focused its regulatory oversight on inspecting Fortum’s management, competence, resource and procurement processes. The Fortum management system renewal project has proceeded as planned.

In 2015, Teollisuuden Voima Oyj (TVO) submitted to STUK 18 operational event reports. The operational events did not compromise nuclear or radiation safety. STUK performed an annual outage inspection in compliance with the inspection programme. A special topic studied during the oversight of annual outages was the replacement of feedwater line mixing points. The mixing points were replaced due to cracks observed during the 2014 annual outage. TVO implemented a new organisation and operations model in 2015. STUK reviewed document updates and safety assessments made based on the change. More work is needed to establish the new operating model, and STUK will continue to monitor the change as part of its regulatory oversight.

At both Olkiluoto and Loviisa NPPs, modifications required for improving safety continued. As a result of the Fukushima accident, four air-cooled heat exchangers were installed at the Loviisa nuclear power plant in 2014 and 2015. They ensure cooling of the fuel in the reactor and the fuel pools in case heat transfer to the sea is lost. Furthermore, separate flood protection improvements have been implemented in some systems important to safety. This work was continued in 2015. STUK continued its review of the Loviisa I&C renewal documents and supervised pre-installation work during the 2015 annual outage. The plan is to complete the first installation stage during the 2016 annual outage, and the I&C renewal should be complete by 2018.

In 2015, STUK evaluated how well the operating plant units at Loviisa and Olkiluoto comply with the requirements of the new nuclear safety guides (YVL Guides), decided which requirements will be applied and how safety must be further improved. No major technical modification needs arose in connection with these implementation decisions, as the most important of the new required issues were already implemented or are being implemented after the Fukushima accident. According to STUK’s decisions, however, both Fortum and TVO must, in the next few years, expand the coverage of accident analyses, improve ageing management procedures of the plants and further develop plant documentation to promote better traceability of design modifications.

Design, installation and construction work of the Olkiluoto 3 project are almost complete and the commissioning phase will start soon. In 2015, STUK’s oversight focused on the finalisation of design and analyses, restarting of activities at the construction site, effects of the TVO’s organisational change, commissioning tests and preparation for operation. STUK approved the plant’s I&C design and conducted site visits to the I&C testing field in Germany in 2015. The installation work at the plant site, which had been discontinued, was restarted in the summer. STUK paid special attention to good construction site practices after the break. Due to the TVO’s organisational change, STUK’s inspections focused on the clarity of roles and responsibilities and adequacy of resources for the Olkiluoto 3 project. No major non-conformances in these issues were detected. In 2015, STUK reviewed system commissioning plans. The plan is to start the commissioning tests of the nuclear island systems during the spring of 2016.

On 30 June 2015, Fennovoima submitted a construction licence application for a new nuclear power plant to the Ministry of Employment and the Economy. At the same time, Fennovoima submitted to STUK for review documents regarding the plant site and separate reports required by the Nuclear Energy Decree. Fennovoima will supplement the construction licence application in stages in compliance with its licensing plan between 2015 and 2017. STUK oversaw the development of Fennovoima’s management system and quality management, and assessed the company’s organisational resources to begin construction of a nuclear power plant. In addition to reviewing the management systems of these actors, STUK conducts inspections to verify that the operations of the organisations comply with the requirements in practice. In September 2015, STUK launched the inspections included in the regulatory inspection programme, and a total of six inspections were carried out in 2015. Furthermore, STUK’s experts participated as observers in audits of the plant supplier and its subcontractors, arranged by Fennovoima.

The handling and storage of spent nuclear fuel and operational nuclear waste and disposal of operational nuclear waste were implemented safely, and no events compromising safety were detected at the Loviisa or Olkiluoto nuclear power plants. Due to the successful planning of operations, the plants accumulated clearly less operational waste than nuclear power plants on average. Fortum was able to determine the cause of the cracks observed in the concrete packages at the Loviisa solidification facility for low- and intermediate level liquid radioactive waste and commissioning of the facility proceeded as planned in 2015. The concrete packages will be placed in the waste disposal facility in the power plant area. In late 2014, Fortum studied the cause and repair methods of cracks observed in the outer surface of a concrete tray in the disposal facility for solidified radioactive waste. The concrete trough must be repaired and the repairs must be approved before the disposal of solidified waste can begin.

The enlargement of the spent fuel storage facility at Olkiluoto, which started in 2009, was completed in 2015 when STUK finalised the safety assessment on commissioning of the extension and approved TVO’s application to increase the capacity of the spent fuel storage facility. In connection with the enlargement, the storage structures were modified to correspond to the new safety requirements in terms of an airplane crash, for example. The operating licence for the research reactor FiR 1 is valid until the end of 2023. However, VTT Technical Research Centre of Finland decided to shut down and decommission the reactor earlier due to financial reasons. VTT stopped using the research reactor in June 2015 and completed the measures needed to keep the reactor in permanent shutdown state by the end of the year. In 2015, STUK continued the oversight of the reactor’s operational safety as before. Furthermore, STUK reviewed the requirements on decommissioning and regulatory oversight together with VTT. Since this is the first nuclear facility decommissioning project in Finland, adressing of the requirements and safety issues already before the submission of the licence application is important to ensure effective regulatory oversight.

STUK made implementation decision for the FiR research reactor on 14 YVL Guides. VTT will apply the other requirements from of the old YVL Guides as long as the FiR reactor is in permanent shutdown and during decommissioning. The most important requirements and effects of the implementation decisions on the FiR 1 reactor involved the development of the management system and the development of employee radiation protection for the decommissioning.

STUK finalised and submitted to the Ministry of Employment and the Economy a statement and safety assessment on the construction licence application for the Posiva encapsulation plant and disposal facility in early 2015. STUK’s conclusion was that the encapsulation plant and disposal facility can be constructed in such a manner that it will be safe. After the review, STUK also prepared decisions on the documents laid down in section 35 of the Nuclear Energy Decree. In these decisions, STUK posed several requirements on Posiva regarding the construction phase and the preparation of the operating licence application. After the statement, STUK focused on planning the regulatory oversight of the encapsulation plant and disposal facility construction and assessing the requirements with Posiva to ensure that the work done by Posiva based on the plans is sufficient to meet the requirements.

After Posiva received the construction licence from the Government on 12 November 2015, STUK’s oversight has focused on the construction phase of the encapsulation plant and disposal facility. The regulatory oversight during the construction phase covers design, manufacture, construction and installation of the nuclear waste facility and its safety classified systems, structures and components. This stage also includes the nuclear waste facility’s commissioning phase, at which time STUK will oversee Posiva’s operations, review test run plans and test run results, and perform commissioning inspections. In practice, construction in 2015 focused on the expansion of facilities implemented as part of the underground research facility (Onkalo). STUK oversaw the construction activities and the research in Onkalo to the required extent.

Posiva aims at harmonising its management system and operations with those of TVO and promote the use of shared resources and competences. STUK focused its oversight on ensuring that resources and functions needed to verify the safety of Posiva’s nuclear facilities will be taken into account when integrating and reconciling the functions. Oversight takes place as part of the construction inspection programme, for example. STUK launched the construction inspection programme when Posiva received the construction licence. Inspections included in the programme assess the performance of Posiva’s management system, the sufficiency of procedures and their ability to guide design, manufacture, construction and installation operations, as well as the taking into account of safety requirements at different stages of the project.

Nuclear safeguards in Finland were implemented in compliance with the international treaties. Nuclear safeguards ensure that nuclear materials and other nuclear items remain in peaceful use in compliance with the relevant licences and declarations, and that nuclear facilities and the related technologies are only utilised for peaceful purposes. STUK maintains a national control system which handles the nuclear safeguards that are necessary for the non-proliferation of nuclear weapons. STUK processed reports and declarations on nuclear materials and performed safeguard inspections together with the International Atomic Energy Agency (IAEA) and the European Commission. Based on these inspections, it was concluded that nuclear energy was used in compliance with the declarations and no undeclared activities were detected.