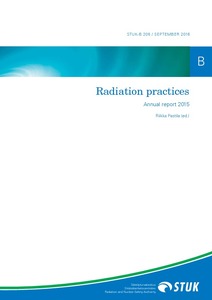 Some 3200 safety licences for the use of radiation were current at the end of 2015, including licences granted to dental X-ray practices (approx. 1600), which became subject to a licence on 1 September 2014. The use of radiation was controlled through regular inspections performed at places of use, test packages sent by post to dental X-ray facilities and maintenance of the Dose Register. The Radiation and Nuclear Safety Authority (STUK) conducted 599 inspections of safety-licensed practices in 2015. Over the course of the inspections, 726 repair orders were issued. Radiation safety guides were also published and research was conducted in support of regulatory control.
A total of over 10 800 workers engaged in radiation work were subject to individual monitoring in 2015, and nearly 69 000 dose entries were made in the Dose Register maintained by STUK.
In 2015, regulatory control of the use of non-ionizing radiation (NIR) focused particularly on lasers, sunbeds, radio appliances and cosmetic applications utilizing non-ionizing radiation. A total of 18 cases of sales or importation of dangerous laser devices were found in regulatory control. Seven on-site inspections of show lasers were conducted. Municipal health protection authorities submitted the details of the inspections of 17 sunbed facilities to STUK for evaluation and decision. In addition to this, four sunbed facilities were inspected on-site. In the market surveillance of wireless communication devices, 14 devices were tested.
In metrological activities, national metrological standards were maintained to the calibrations of the radiation meters for radiotherapy, radiation protection and X-ray imaging. STUK’s metrological laboratory performed well in the measurement comparisons where STUKs results clearly fullfilled the acceptance criteria.. In external evaluations, the laboratory was found to comply with the requirements set for national metrological laboratories.
There were 98 abnormal events related to radiation use in 2015. Thirty of the cases dealt with the use of radiation in industry and research, 64 with the use of radiation in health care, and four with non-ionizing radiation. Furthermore, 755 events with an estimated lower safety significance were reported in regards to health care.