Changes in alcohol affordability and availability : Twenty years of transitions in Eastern Europe 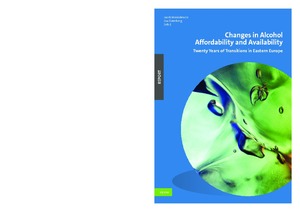 The last twenty years of transitions have showed mixed results regarding economic and health developments in Eastern Europe an area which appears to be a unique laboratory for tracing the interplay between social change, alcohol policy, alcohol consumption and related harms. This book contains contributions from countries all over Eastern Europe; - Russia, Belarus and Ukraine which emerged as independent states after dissolution of the Soviet Union but remains outside the European Union, - the three Baltic states which regained independence in the early 1990s and joined EU in 2004 and - Czech Republic, Hungary, Poland and Romania which also broke with their former political affiliations and economic ties with the Soviet Union in the early 1990s and joined the EU either in 2004 or 2007. However, this is not only a book of alcohol history and country specific developments in Eastern Europe. It is also an attempt to gain a better understanding of why scientific knowledge of the effectiveness and cost-effectiveness of different alcohol control measures is not the only decisive factor for paving the way to the implementation of effective public health oriented alcohol control measures.