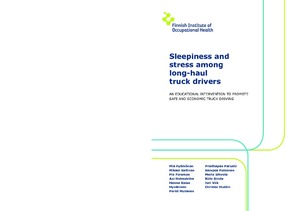 Sleepiness and stress at the wheel are known to be common among professional drivers. Given the safety-sensitive nature of the job, it would be essential for neither of these conditions to reach levels compromising safe driving. The current field study examined the levels of sleepiness and stress at the wheel in a group of Finnish long-haul truck drivers, and the potential factors contributing to the sub-optimal levels of arousal. Over and above, the study examined whether driver alertness could be amended by short one-time alertness management training.

The results revealed that driver sleepiness reaches potentially risky levels, especially during the first night shift in the beginning of a shift spell. No clear evidence was found to support the idea that educating professional drivers on alertness management would be sufficient for mitigating their sleepiness on the road.