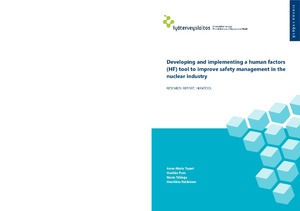 This research report describes the development and implementation of
an HF tool and the outputs of this process during the research project
HUMTOOL (Applying an HF tool to learn about and to analyse the
human contribution to nuclear safety) in 2015-2017.
In this research report, we summarise the development phases of the
HF tool and evaluate the user experiences of the HF tool. We also
ponder possibilities for nuclear actors (power plants, regulator, project
organisation) to implement the HF tool, and identify areas in which the
HF tool needs further development. We utilise findings of workshops
and interviews conducted in 2015 and 2016 as background material.
Mainly, this report summarises the work done in 2017, which produced
research material comprising the intervention material and group
interviews collected in five workshops with different nuclear actors, two
NPPs, one NPP project and a regulator. To provide a solid basis for the
HF tool, we also present the origin and theoretical background of the
HF tool, made for Finnish air traffic management in the 2000’s, to be
utilised in the future development of the tool.