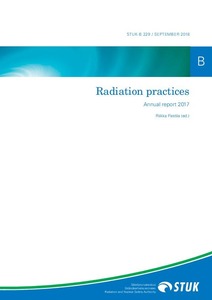 Pastila, Riikka
Säteilyturvakeskus
This publication is copyrighted. You may download, display and print it for Your own personal use. Commercial use is prohibited.
Näytä kaikki kuvailutiedot
Julkaisun pysyvä osoite on
http://urn.fi/URN:ISBN:978-952-309-427-7
STUK-B : 229

A total of 3086 safety licences for the use of ionizing radiation were current at the end of 2017. The use of radiation was controlled through regular inspections performed at places of use, test packages sent by post to dental X-ray facilities and maintenance of the Dose Register. The Radiation and Nuclear Safety Authority (STUK) conducted 584 inspections of safety-licensed practices in 2017. The inspections resulted in 687 repair orders issued. In addition, radiation safety guides were published and research was conducted in support of regulatory control.

A total of 11 381 occupationally exposed workers were subject to individual monitoring in 2017 and 70 536 dose entries were recorded in the Dose Register maintained by STUK.

In 2017, regulatory control of the use of non-ionizing radiation (NIR) focused on lasers, sunbeds, radio appliances and cosmetic NIR applications. Two cases of sales or import of dangerous laser devices were found through regulatory control. Fifteen on-site inspections of show lasers were conducted. Municipal health protection authorities submitted the details of the inspections of 31 sunbed facilities to STUK for evaluation and decision. In addition to this, six sunbed facilities were surveyed on the basis of STUK’s own monitoring.