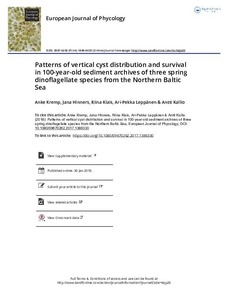 
Kremp, Anke
Hinners, Jana
Klais, Riina
Leppänen, Ari-Pekka
Kallio, Antti
This publication is copyrighted. You may download, display and print it for Your own personal use. Commercial use is prohibited.
doi:10.1080/09670262.2017.1386330
Näytä kaikki kuvailutiedot

The history of expansion of bloom-forming cold water dinoflagellates in the Northern Baltic Sea was studied using 100-year-old sediment archives of their resting cysts. Vertical cyst distributions of Biecheleria baltica and Apocalathium malmogiense, two dinoflagellates indistinguishable by light microscopy and not recognized as distinct species in monitoring, and chain-forming Peridiniella catenata were analysed in Pb210 and Cs137 dated layers of a sediment core from deep, hypoxic accumulation bottoms of the Gulf of Finland. Cyst profiles showed that B. baltica and A. malmogiense were already
present in the Baltic spring phytoplankton community at the beginning of the 20th century. This confirms that B. baltica, which was only recognized in the late 1980s, is a native species in the area. A drastic increase in B. baltica cyst concentrations in the 1930s to 1960s coincided with the acceleration of anthropogenic eutrophication. Large cyst deposits accumulated over several decades in the sediment which, by the 1980s, amounted to the seed stock necessary to inoculate dominant blooms. In the cyst records A. malmogiense always contributed a minor fraction of the two species. P. catenata had a relatively short cyst record in Gulf of Finland sediments despite demonstrated long-term presence in the plankton, which emphasizes that cyst-based historic surveys are not suitable for all cyst-forming dinoflagellates. This was corroborated by correspondence analyses of long-term plankton and cyst records which validated the trends from the sediment archive for B. baltica and A. malmogiense, but failed to do so for P. catenata. Germination experiments with 100-year-old cysts revealed a remarkable long-term survival capacity of A. malmogiense, making this species a suitable model for resurrection
studies testing adaptation in heavily impacted systems such as the Baltic Sea.