Does It Matter How You Retire? Old-Age Retirement Routes and Subjective Economic Well-Being 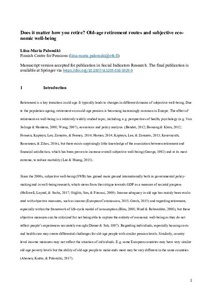 Does it matter how you retire. Old-age retirement routes and subjective economic wellbeing.pdf (589.7Kt)
Lataukset:

Palomäki, Liisa-Maria
Springer Netherlands
This publication is copyrighted. You may download, display and print it for Your own personal use. Commercial use is prohibited.
doi:10.1007/s11205-018-1929-9
Näytä kaikki kuvailutiedot
Julkaisun pysyvä osoite on
http://urn.fi/URN:NBN:fi-fe2019041812838
Social Indicators Research : 2

This study explores the association between retirement on an old-age pension and subjective economic well-being. The study starts by analyzing this association in general, and proceeds by distinguishing different retirement routes, measured with a preceding activity status. People with different labour market statuses generally enjoy different levels of income, and a transition to retirement might have adverse consequences for the subjective and objective economic well-being. The empirical analyses are based on the longitudinal component of the EU-SILC 2010–2013, including 26,680 individuals aged at least 55 years and 73,614 person years. The data is analyzed with individual linear fixed effect regression models and dummies for retirement transition and retirement routes. Results show that old-age retirement in general is associated with a slight decrease in subjective economic well-being. However, a more detailed exploration reveals that retirement clearly has adverse associations for people retiring from different labor market statuses. Those transitioning from work perceive a clear cutback in perceived income adequacy, whereas the effect is to a greater extent positive for those transitioning from unemployment, and to a lesser extent for those transitioning from other statuses. Results of the study add to the discussion on retirement and subjective well-being and that on age, income and financial satisfaction.