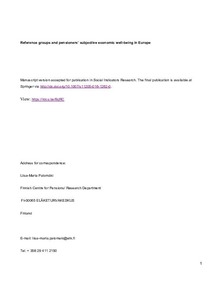 Palomäki, Liisa-Maria
Springer
This publication is copyrighted. You may download, display and print it for Your own personal use. Commercial use is prohibited.
doi:10.1007/s11205-016-1262-0
Näytä kaikki kuvailutiedot
Julkaisun pysyvä osoite on
http://urn.fi/URN:NBN:fi-fe2019043013819
Social Indicators Research : 2

This study contributes to the interdisciplinary debate over the effects of absolute and relative income on subjective well-being by introducing country-level measures of income into the analysis of pensioners’ economic well-being. Both the relevance of alternative reference groups for different phases of old age, measured through median incomes, and the effect of general income inequality within countries are explored. Analyses are based on the cross-sectional components of the survey European Union Statistics on Income and Living Conditions from 2005 to 2011, containing information on 458,769 pensioners from 31 European countries. With the multilevel linear regression analysis method, the effects of different income measures are analyzed both at the individual and country levels. The main result shows that the average income level of pensioners within countries hold spillover effects strong enough to conclude other pensioners constitute a relevant reference point. Pensioners’ high income level decreases individual income adequacy regardless of age. Results also indicated the labour market group having varying effects on different age groups. The general income inequality does not affect pensioners’ subjective economic well-being.