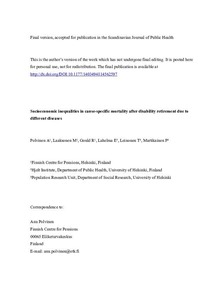 Methods: We used administrative register data from various sources linked together by Statistics Finland and included an 11% sample of the Finnish population between the years 1987 and 2007. The data also include an 80% oversample of the deceased during the follow-up. The study included men and women aged 30-64 years at baseline and those who turned 30 during the follow-up. We used Cox regression analysis to examine socioeconomic differences in mortality after disability retirement.