Intervening in domestic violence and training of professionals in social services and health care and the police : Evaluation of the EPRAS project 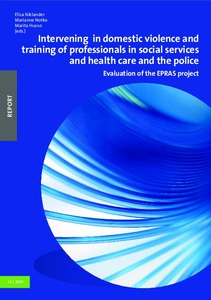 The Enhancing Professional Skills and Raising Awareness on Domestic Violence, Violence against Women and Shelter Services (EPRAS) project funded for the years 2017 2019 under the EU s Rights, Equality & Citizenship programme focused on encounters with and interventions on domestic violence particularly from the perspectives of the social and health care sectors and the police. The project was coordinated by the Finnish Institute for Health and Welfare (THL) and implemented by the University of Jyväskylä in cooperation with the Police University College. The project developed an online training programme (Luo luottamusta Puutu väkivaltaan / Create trust Stop the violence) intended for various branches. Because of its multisectoral approach, broad content and accessibility, the training package has major international significance. The project also implemented a civic campaign on encountering domestic violence and on shelter services for the victims of domestic violence. In addition, the project produced research data on domestic violence as a phenomenon, the challenges of work against violence, and the competence of professionals and enhancing it especially as regards recognising violence and intervening in it.