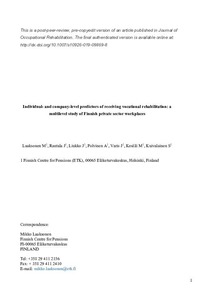 Purpose: The aim of this study was to examine the magnitude of company-level variation in vocational rehabilitation (VR) and to determine which individual- and company-level characteristics are associated with receiving VR due to mental disorders, musculoskeletal diseases, and other somatic diseases.

Methods: A 30% random sample of all Finnish private sector companies with more than 10 employees aged 25-62 years at the end of 2010 (5,567 companies with 300,601 em-ployees) was followed up for the receipt of VR over the next six years. Company size and industry, as well as gender, age, education, social class and sickness absence measured both at the individual- and company-level were used as explanatory variables in multilevel logit models.

Results: After controlling for the individual-level characteristics, 12% of the variance in VR was attributed to the company level. The proportion was largest in VR due to muscu-loskeletal diseases. Receiving VR was more common among women, older employees (except the oldest age group), those with low education (particularly due to musculoskele-tal diseases), low social class, and previous sickness absence. Receiving VR was more common in larger companies, and in construction and in health and social work, and less common in professional, scientific and technical activities. Furthermore, receiving VR was more common in companies with low proportion of highly educated employees and with higher sickness absence rates.