Roadmap for Systematic Data Collection in Services for People with Disabilities 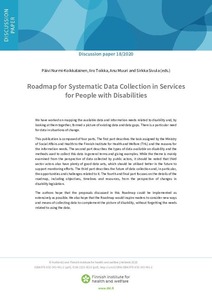 We have worked on mapping the available data and information needs related to disability and, by looking at them together, formed a picture of existing data and data gaps. There is a particular need for data in situations of change.
This publication is composed of four parts. The first part describes the task assigned by the Ministry of Social Affairs and Health to the Finnish Institute for Health and Welfare (THL) and the reasons for the information needs. The second part describes the types of data available on disability and the methods used to collect this data in general terms and giving examples. While the theme is mainly examined from the perspective of data collected by public actors, it should be noted that third sector actors also have plenty of good data sets, which should be utilised better in the future to support monitoring efforts. The third part describes the future of data collection and, in particular, the opportunities and challenges related to it. The fourth and final part focuses on the details of the roadmap, including objectives, timelines and resources, from the perspective of changes in disability legislation.
The authors hope that the proposals discussed in this Roadmap could be implemented as extensively as possible. We also hope that the Roadmap would inspire readers to consider new ways and means of collecting data to complement the picture of disability, without forgetting the needs related to using the data.