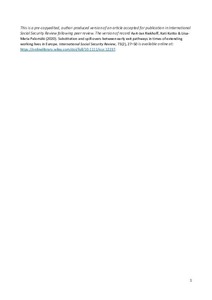 This article investigates to what extent instrument substitution between early exit pathways took place in Europe between 1995 and 2015. Using Eurostat aggregate data on labour market inactivity and employment rates among the population aged 55–64 in 19 European countries, we analyse substitution effects between pathways and overall spill‐over effects into non‐employment. In spite of a strong decline in early exit and rises in older workers’ employment rates, findings suggest that instrument substitution was common especially between early retirement and disability. Reductions in early exit coincided with considerable spill‐overs into non‐employment, yet these spill‐overs were limited when pathways contracted simultaneously.