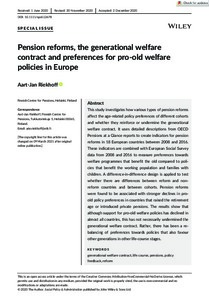 This study investigates how various types of pension reforms affect the age‐related policy preferences of different cohorts and whether they reinforce or undermine the generational welfare contract. It uses detailed descriptions from OECD Pensions at a Glance reports to create indicators for pension reforms in 18 European countries between 2008 and 2016. These indicators are combined with European Social Survey data from 2008 and 2016 to measure preferences towards welfare programmes that benefit the old compared to policies that benefit the working population and families with children. A difference‐in‐difference design is applied to test whether there are differences between reform and non‐reform countries and between cohorts. Pension reforms were found to be associated with stronger declines in pro‐old policy preferences in countries that raised the retirement age or introduced private pensions. The results show that although support for pro‐old welfare policies has declined in almost all countries, this has not necessarily undermined the generational welfare contract. Rather, there has been a re‐balancing of preferences towards policies that also favour other generations in other life‐course stages.