Carrots, sticks and old-age retirement : A review of the literature on the effects of the 2005 and 2017 pension reforms in Finland – an extended version 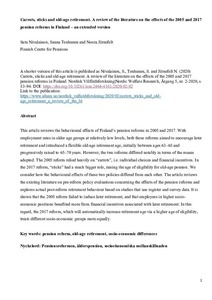 Nivalainen et al (2020) Carrots, sticks and old-age retirement. A review of the literature on the effects of the 2005 and 2017 pension reforms in Finland – an extended version.pdf (529.2Kt)
Lataukset:

This article reviews the behavioural effects of Finland’s pension reforms in 2005 and 2017. With employment rates in older age groups at relatively low levels, both these reforms aimed to encourage later retirement and introduced a flexible old-age retirement age, initially between ages 63–68 and progressively raised to 65–70 years. However, the two reforms differed notably in terms of the means adopted. The 2005 reform relied heavily on “carrots”, i.e. individual choices and financial incentives. In the 2017 reform, “sticks” had a much bigger role, raising the age of eligibility for old-age pension. We consider how the behavioural effects of these two policies differed from each other. The article reviews the existing literature on pre-reform policy evaluations concerning the effects of the pension reforms and explores actual post-reform retirement behaviour based on studies that use register and survey data. It is shown that the 2005 reform failed to induce later retirement, and that employees in higher socio-economic positions benefited more from financial incentives associated with later retirement. In this regard, the 2017 reform, which will automatically increase retirement age via a higher age of eligibility, treats different socio-economic groups more equally.