Poverty and Overcrowding among Immigrant Children in an Emerging Destination: Evidence from Finland 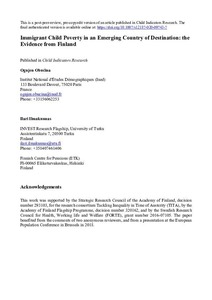 This paper aims to analyze the patterns of poverty and housing overcrowding among immigrant children in Finland. We seek to explore whether and to what degree foreign-born children are disadvantaged relative to native children in terms of income poverty and overcrowded housing. Another main objective is to study the patterns of immigrant child poverty and overcrowding in the first years of settlement. We distinguish between four different types of poverty trajectories in the first 5 years after arrival in Finland: (1) no experience of poverty; (2) poor in up to two out of 5 years following arrival (mostly non-poor); (3) poor in three or four out of 5 years following arrival (mostly poor); and (4) poor in all 5 years (chronic poverty). An analogous classification is applied when looking at housing overcrowding. We use data from a compilation of Finnish registers, which contain annual information on all individuals who resided in Finland at any point between 1995 and 2014. The results of a series of logistic regressions show that the disadvantage of immigrant children relative to native children is more pronounced in terms of income poverty than in terms of housing. The most frequent outcome in terms of income poverty in the first years of settlement is no experience of poverty, followed by chronic poverty, i.e., poverty in all 5 years after arrival. The same patterns are found for overcrowding. The multivariate analyses, based on generalized ordered logistic regressions, show substantial heterogeneity across immigrant groups.