Career stability in turbulent times: A cross-cohort study of mid-careers in Finland 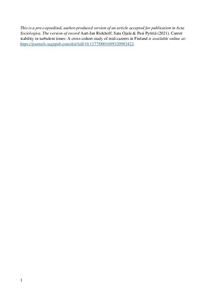 In this article, we investigate whether the mid-career stability of Finnish men and women has changed for the birth cohorts 1958 to 1972 and, if so, what the driving forces are behind such changes. We analyse career stability during a 15-year period following the age of 30 using ‘career turbulence’ indicators. To identify the impact of cyclical and structural changes in the labour market, we analyse the association between initial employment status and sector with subsequent career stability. We distinguish between sectors that are exposed to a greater or lesser extent to global competition, those that are characterised by goods production or service provision, and those that are part of the market or non-market sector. In a series of OLS regression and regression decomposition analyses, we also control for the impact of education, regional unemployment and family-formation processes. The results show little change in mid-career stability across cohorts. Stability increased somewhat when only including transitions between employment and non-employment, whereas slight destabilisation was observed when accounting for changes between jobs. The findings indicate that the small changes in stability across cohorts were mostly driven by structural changes in the labour market, albeit with different mechanisms for men and women.