Determinants of transition from partial to full disability pension: a register study from Finland 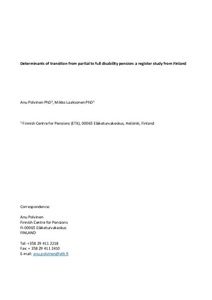 Aims: This study explored the rate of transition from partial to full disability pension (DP) and aimed to determine whether age, sex, education, employment status, employment sector, pension type and medical cause of disability were associated with transition to full DP during a four-year follow-up. Methods: We used register data, including a 70% random sample of partial disability pensioners aged 20–58 at the time that their partial DP started in 2010 or 2011 (N=5277). Competing risk analysis was used to estimate sub-hazard ratios (SHR) and their 95% confidence intervals (CI) for full DP. Results: One third of partial disability pensioners transitioned to full DP during the four-year follow-up. More than half (52%) continued on partial DP, and 15% were in some other state. Men, older people, those with low education levels, those whose pension was granted until further notice and those whose pension was due to mental disorders (MD) proceeded to full DP more often than others. The SHR for full DP was 1.62 (95% CI 1.43–1.83) among partial disability pensioners with MD and 1.15 (95% CI 1.02–1.28) among partial disability pensioners with other diseases compared to those whose pension was granted due to musculoskeletal diseases. Conclusions: Partial DP is a relatively stable state, and moving to full DP is relatively rare. However, male sex, older age, low education level, a pension granted until further notice and partial DP due to MD are important risk factors for full DP. The risk factors for ending up on full DP varies by diagnosis and pension type.