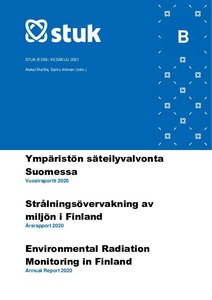 This report is a national summary of the results of environmental radiation monitoring in Finland in 2020. In addition to the Radiation and Nuclear Safety Authority, results to the report has been provided by the Finnish Meteorological Institute regarding the total beta emission activity of outdoor air.
The environmental radiological monitoring programme includes the continuous and automatic monitoring of the external dose rate, monitoring of radioactive substances and total beta activity in outdoor air as well as the regular radioactivity analysis of radioactive fallout, surface and domestic water, waste, milk and foodstuffs. The programme also includes the monitoring of radioactive substances within the human body and monitoring of the radon in indoor air. This report also includes summaries of the results of the Baltic Sea radioactivity monitoring and topical investigations of the sub-programmes part of environmental radiation monitoring.
The 2020 results demonstrate that the artificial radioactive substances in the environment mostly originate from the Chernobyl disaster in 1986 and nuclear tests conducted in the atmosphere in the 1950s and 1960s, and the amount of these substances is decreasing in the living environment.
During 2020, artificial radioactive substances were detected in outdoor air, especially in samples collected in Kotka. However, detections were also made at all other collection stations. In early March, several fission and activation products were detected in samples collected in Kotka and Imatra. At the end of April, the iodine isotope 131I was detected in a sample collected in Kotka. In mid-June, several activation and fission products were again detected in samples collected in Kotka and Helsinki. In July, the cobalt isotope 60Co was detected in a sample collected in Kotka. In early August, an isomer of the silver isotope 110mAg was detected, and in late August the caesium isotope 134Cs, both from samples collected in Kotka. 60Co and 131I were again detected in a sample collected in Kotka between September and October. In early December, 131I was widely detected, and was found in all samples except Helsinki. The origin of the August silver discovery was determined to be the Loviisa nuclear power plant. The origins of the other observations could not be established with certainty. The amounts of all the artificial radioactive substances observed during the year in outdoor air were extremely small and they do not have any impact on human health.
The external radiation monitoring network worked well. Of the measuring station results, the external radiation monitoring data management system USVA collected more than 97% of the measurements produced at all measuring stations. Missing data was caused by equipment malfunctions or telecommunication problems. In 2020, the GM sensors of the monitoring network issued nine alarms. Three of the alarms were caused by radiographic testing. Three alarms occurred on the same day caused by exceptionally heavy rainfall in September in Western Finland. Two alarms were caused by measurement activity training with radiation sources, and the cause of the other one was unknown. No alarms came through the spectrometer network.
The tritium contents in fallout and household water samples were small, in total 1 – 2 Bq/l. No 137Cs activity concentrations exceeding 600 Bq/kg were found in food samples. This concentration should not be exceeded when putting wild game, berries, mushroom and lake fish on the market.
137Cs from the Chernobyl disaster, natural radioactive substances and radioactive substances used at hospitals were observed in waste. Secretions from patients in the cancer clinics and isotope wards of hospitals using radionuclides migrate to wastewater treatment plants and are thus evident in waste.
The radiation exposure caused by artificial radioactive substances in the environment in 2020 was under 0,02 mSv, which is low compared to Finns’ overall average dose of 5,9 mSv. The 2020 results demonstrate that there were no releases of radioactive substances into the environment during the year that would have any detrimental impact on human health or the environment in Finland.
The primary source of radon (222Rn) in indoor air is the rock material containing uranium in the soil. High radon concentrations occur in buildings whose foundations are not sufficiently well sealed to prevent the entry of radon-carrying soil air. Radon is most effectively prevented by measures taken at the construction stage, i.e. by building the base floor structures to be leak-tight and installing radon piping under the floor slab. According to STUK’s measurements, radon concentrations in the indoor air of dwellings are lower than before. In 2020, the median for radon concentration in residential measurements was 95 Bq/m3 (2019 109 Bq/m3) and the average 188 Bq/m3 (2019 222 Bq/m3), and 17% (2019 21%) of measurements were greater than the reference value of 300 Bq/m3.
The concentration values from the national radon database, which stores STUK’s radon measurement results from dwellings, overestimate the radon concentration values, because more measurements are carried out in the known areas of high radon concentration than in areas of low radon concentrationThe radon dose assessment method in indoor air changed in late 2018. Applying the new assessment method, the radon dose value in homes is 4 mSv per year while the previous method estimated the dose at 1,6 mSv annually.
The determination of the average annual radiation dose to Finns is discussed in STUK publication STUK-A263 Suomalaisten keskimääräinen efektiivinen annos vuonna 2018 (The average effective dose received by Finns 2018).