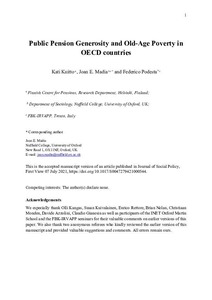 Pension adequacy is gaining importance as old-age poverty remains a pressing problem. In many advanced welfare states, the population is ageing rapidly and recent pension reforms have led to cuts in public pension provision. There are, however, few comparative longitudinal studies on the relationship between pension generosity and old-age poverty. This study provides a comparative empirical assessment of how the prevalence and depth of old-age poverty relates to generosity of public pension benefits in 14 advanced OECD welfare states from 1980-2010. We focus on the role of mandatory public pension provision of mainly first tier schemes that grant the major share of retirees’ income in most countries. We use data on theoretical pension replacement rates for retirees who had different working-age incomes. In order to address endogeneity issues, we adopt an instrumental-variable approach. Our main finding shows that pensions systems and earnings-related schemes, in particular, are quite efficient in reducing the risk of old-age poverty. Yet they still do very little to alleviate poverty among those pensioners in the most disadvantaged situations. We also found that redistribution within the pension system does not substantially contribute to poverty alleviation.