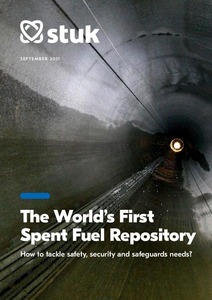 How to dispose of spent nuclear fuel safely and permanently? This is one of the fundamental questions related to the use of nuclear energy, that has been waiting for an answer since criticality of the first commercial reactors some sixty years ago. Also, in Finland, discussion on the question of nuclear waste was on the public agenda already when the first reactor was commissioned in the late 1970s and nuclear waste management policy and strategy were actively developed on the national level.

This paper describes from the regulatory perspective how Finland changed the game and how Finland is developing a safe1 and sustainable solution for disposal of spent nuclear fuel. It will explain how this became politically acceptable, how the long-term safety of the solution is being demonstrated and how regulatory challenges related to safety, security and safeguards are being resolved in this first-of-its-kind facility. In broad terms, it will illustrate how the progress in geological disposal has been made possible in Finland and further highlight topical issues that are of interest to professionals and policymakers.

The first chapter is focused on public acceptance and development of nuclear waste management policy and strategy in Finland. The second chapter explains how the long-term safety of the final repository has been handled and what the supporting technical solutions are. In the third and final chapter, an overview of safeguards of the disposal process is provided. Safeguards, a prerequisite for peaceful use of nuclear energy, is a topic of utmost importance also in the last leg of the nuclear fuel cycle.

The scope of this short paper is rather limited and far from complete, but hopefully it manages to pass on certain lessons: responsible decision-making and a long-term political commitment to the chosen method, together with the research and development of the technical solution and enabling regulatory framework, are the keys for accomplishing the difficult task of disposing of spent nuclear fuel safely and permanently.