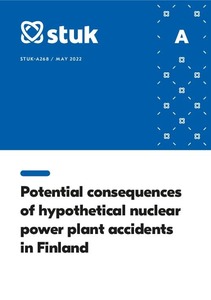 An assessment of the environmental consequences of radioactive releases from
severe reactor accidents was performed for Finnish nuclear power plants (NPP) in
operation (Loviisa 1 and 2, and Olkiluoto 1 and 2), in commissioning (Olkiluoto 3)
and in the preparatory phase (Hanhikivi 1). Three hypothetical radioactive releases
(Basic, Large and Very Large cases) with different magnitudes were considered.
Basic case represents a release corresponding to the limit set in requirements for
severe reactor accidents, and thus, the other two represent extremely unlikely
situations where severe accident management has failed. The magnitude of
Very Large case is similar to the Fukushima NPP accident and roughly one order
of magnitude smaller than the Chernobyl NPP accident, while the magnitude
of Large case is roughly one order of magnitude smaller. The environmental
assessment on the consequences of the releases was performed using a
probabilistic approach. The aim is to estimate radiation doses to the population
around the NPP and land contamination resulting from the release of radioactive
material. The results of the assessment were compared to the protective action
criteria for radioactive release from an NPP, and further used to evaluate the
sufficiency of the Precautionary Action Zone (PAZ) and Emergency Planning
Zone (EPZ) given in Finnish regulation. The probability of exceeding different
operational intervention levels (OIL) and dose criteria set for external dose rate,
effective dose, thyroid dose, deposition of strong gamma emitters, deposition
of cesium, and concentration of gamma emitters in the air were estimated for
distances up to 300 km from each site.

Dispersion and deposition of releases were modelled with the dispersion model
SILAM of the Finnish Meteorological Institute. The modelling applied historical
weather forecast data from the years 2012–2015 retrieved with operative weather
forecast models AROME and HARMONIE. Dose rates and doses were determined
from the radionuclide air concentrations and depositions with the threat assessment tool TIUKU. The assessment was preformed using 2920 dispersion realizations for each reactor type and release scenario. For the assessment, the 95th percentile of the modelled dispersion, deposition and dose data was selected.

It was observed that the dose criteria for an adult’s effective and thyroid
dose were exceeded in larger areas than suggested by the criteria based on the
external dose rate. Furthermore, dose criteria for a child’s thyroid dose were
exceeded in larger areas than the dose criteria for the recommendation to limit
being outside, even though the iodine prophylaxis for children and pregnant
females is set as a complementary protective action for the recommendation
to limit being outside. The observation demonstrates that the content of the
radioactive release must be carefully considered in a severe NPP accident as the
amount of released iodine isotopes affect the thyroid dose, while other nuclides
make only a small contribution to it. It was also observed that precipitation
may cause the deposition of radioactive substances such that in large areas the
criteria for protective action based on deposition may be exceeded, even when
protective actions would not be warranted according to dose criteria for effective
doses. In Large and Very Large cases, the deposition may lead to the need for
decontamination of large areas, and temporary or even permanent relocation
of people. These findings demonstrate the importance of primarily using dose
criteria in decision making if dose calculations can be performed reliably during
the actual nuclear or radiological emergency. The OILs shall be used only if
measures with dose criteria cannot be determined reliably e.g., due to a lack of
information. Based on the results, it was concluded that further study is needed to set an Extended Planning Distance (EPD) and Ingestion and Commodities
Planning Distance (ICPD). In such a study, a level 2 Probabilistic Risk Assessments
(PRA) considering the probability of atmospheric releases should be better linked
with environmental consequence assessment. The International Atomic Energy
Agency (IAEA) recommends the EPD and ICPD to facilitate preparedness planning
and the execution of protective actions beyond the PAZ and EPZ. The existence
of an EPD and ICPD could also improve the effective co-operation of different
authorities and emergency workers in a nuclear emergency.

In Large and Very Large cases, the seasonal variations between summer and
winter were found to be significant especially when considering deposition of
cesium and strong gamma emitters. It was observed that precipitation during the
winter season causes more wet deposition than in the summer. In a Very Large
case, the seasonal variations were also significant in other measures.