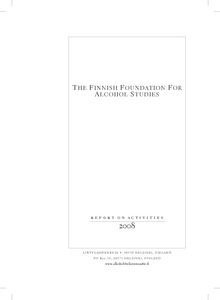 The projects funded by the Finnish Foundation for Alcohol Studies resulted in the publication of three academic doctoral dissertations and 31 new peer-reviewed articles in scientific journals or books in 2008 (including earlier published but reported in 2008). Seven other scientific papers were published. Two ongoing research contract projects
received additional funding and six new research contract projects were launched. One of the latter will study the effects of addictive drugs on the plasticity of the brain, focusing especially on midbrain dopaminergic cells. The second will study the influences of brain nerve growth factor on the regulation of drinking. The third explores drinking practices,
intoxication, drinking situations and meanings of drinking in the life of men and women by age and education. The fourth studies the criminal way of life among drug addicts and the effect of criminal sanctions on it. The fifth analyses factors influencing the alcohol policies in Estonia from the beginning of its independence in 1991. The sixth clarifies the
interactions of alcohol and genes on aggressive behavior. Other contract projects will be described below under the title Research activities. In 2008, the foundation was able to fund 30 % of the total sum applied for alcohol research, including alcohol-related drug research and temperance studies. The state subsidy for the foundation has remained
unchanged from 1995 onwards, while the cost of living has increased over 25 %.
During the five-year period 2002–2006, funding by the foundation resulted in 23 academic doctoral dissertations and 108 peer-reviewed articles in international scientific journals. Input of one million euros brought about on the average 8.8 doctoral dissertations and 41.1 peerreviewed articles. Productivity of doctoral dissertations was 6.4-fold and that of peer-reviewed articles 3.8-fold compared with the average
productivity of universities in Finland.
The foundation took part in the international research consortium ”Theories of addiction and images of addictive behaviours (IMAGES)”, funded by the Academy of Finland, by doing research on the history, nature and etiology of addictions. Based on a funding agreement with the Ministry of Health and Social Affairs, the foundation allocated
approximately 244 000 euros for grants to study gambling problems. In 1995–2008, the Foundation had its office at the National Research and Development Centre for Welfare and Health. The latter and the National Public Health Institute were merged together to form the National Institute for Health and Welfare in 2009 and became the site of our office. Administration