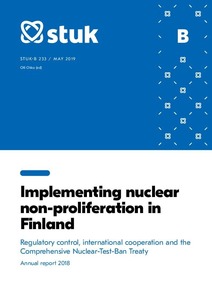 Abstract
The regulatory control of nuclear materials (nuclear safeguards) is a prerequisite for the peaceful use of nuclear energy in Finland. In order to maintain the Finnish part of the international agreements on nuclear non-proliferation – mainly the Non-Proliferation Treaty (NPT) – this regulatory control is implemented mainly by the Nuclear Materials Safeguards Section of the Finnish Radiation and Nuclear Safety Authority (STUK). In addition, the Ministry for Foreign Affairs (MFA) and Ministry of Economic Affairs and Employment (MEAE), have their roles in safeguards. During 2018, STUK together with the ministries strengthened national cooperation in the areas of non-proliferation, export control and nuclear disarmament.
Finland has quite significant nuclear power production, but the related nuclear industry is rather limited. Most of the declared nuclear materials (uranium, plutonium and thorium) in Finland reside at the nuclear power plants at Olkiluoto and Loviisa. Additionally, there is the shut-down research reactor in Espoo with nuclear fuel at the site, as well as a dozen minor nuclear material holders in Finland. The International Atomic Energy Agency (IAEA) and the European Commission made their visits to the construction site of the Olkiluoto 3 unit and installed safeguards instrumentation before the first fuel delivery that took place in 2017. The initial inventory verification of the new reactor unit was carried out in February 2018.
A new category of nuclear material holder was initiated in 2018 owing to the decision of the MEAE that all production source material grade uranium in the metal industry must be licensed according to Finnish nuclear energy legislation. STUK therefore granted operating licences to the Boliden Group’s Zinc and Copper production units at Kokkola and Harjavalta, owing to the uranium-rich intermediate copper product. These operations and materials are not considered by the European Commission and are excluded from the EU Safeguards Regulation owing to the non-nuclear use of the source material.
STUK maintains a national nuclear materials accountancy system and verifies that nuclear activities in Finland are carried out in accordance with the Finnish Nuclear Energy Act and Decree, European Union Safeguards Regulation and international agreements. These tasks are performed to verify that Finland can assure itself and the international community of the absence of undeclared nuclear activities and materials. In addition to this, the IAEA evaluates the success of the state safeguards system, and the European Commission participates in safeguarding the materials under its jurisdiction.
The results of STUK’s nuclear safeguards inspection activities in 2018 continued to demonstrate that Finnish licence holders take good care of their nuclear materials. There were no indications of undeclared nuclear materials or activities, and the inspected materials and activities were in accordance with the stakeholders’ declarations.
The number of routine inspection days of the international inspectorates has been reduced significantly due to the state-level safeguards approach for Finland, which has been in force since 2008. The number of international inspection days per year is approximately 25. According to the statements on inspection results and the conclusion of safeguards implementation provided by the IAEA and the Commission, neither the IAEA nor the Commission made any remarks or required any actions. However, at the end of 2018 there was an unresolved request for clarification concerning findings after the activities carried out by the IAEA in April 2018. This clarification was consequently prepared and provided to the IAEA in early 2019. In addition, there were a few other follow-ups pending owing to equipment maintenance needs. By means of their nuclear materials accountancy and control systems, the stakeholders enabled STUK to fulfil its own obligations under the international agreements relevant to nuclear safeguards. In safeguards, STUK continues with 40 annual inspections and 60 inspection days.
A major goal of all current Comprehensive Nuclear-Test-Ban Treaty (CTBT)-related activities is the entry into force of the CTBT itself. An important prerequisite for such positive political action is that the verification system of the Comprehensive Nuclear-Test-Ban Treaty Organization (CTBTO) is functioning and able to provide assurance to all parties that it is impossible to make a clandestine nuclear test without detection. The FiNDC is committed to its own role in the common endeavour, so that the verification system of the CTBTO can accomplish its detection task.
Human resources development at the Nuclear Materials Section during 2018 was focused on a comprehensive competence development taking into account the risk assessment of certain areas of expertise and the ability of personnel to cope at work. The objective is to ensure the necessary human resources now and in the future and to develop the work and work flows to fulfil STUK’s strategy for 2018–2022 with emphasis on the strategic target of ‘having the happiest civil servants in the world’. As a continuation of technical development work, due to the need to regulate the construction of the disposal facility for spent nuclear fuel at the Olkiluoto repository site, safeguards instrumentation was under development, in particular passive gamma emission tomography and passive neutron albedo reactivity measurement for the verification of spent fuel.
In addition, STUK contributed to educational workshops and training courses for authorities that represent nuclear newcomers: countries that aim at uranium production or nuclear power in cooperation with the IAEA. STUK also contributed to EU-funded projects in Tanzania and Vietnam, respectively. In 2018, the partnerships programme between King Abdullah City for Atomic and Renewable Energy (K.A.CARE), the Kingdom of Saudi Arabia, and STUK continued supporting the establishment of Saudi Arabia’s regulatory authority in relation to its nuclear energy programme.