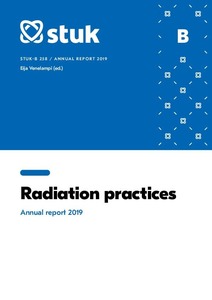 Venelampi, Eija
Säteilyturvakeskus
This publication is copyrighted. You may download, display and print it for Your own personal use. Commercial use is prohibited.
Näytä kaikki kuvailutiedot
Julkaisun pysyvä osoite on
https://urn.fi/URN:ISBN:978-952-309-480-2
STUK-B : 258

A total of 3 079 safety licences for the use of ionising radiation were current at the end of 2019. The use of radiation was controlled through regular inspections performed at places of use, regulatory control queries, control test packages sent by post to dental X-ray facilities, and maintenance of the Dose Register. The Radiation and Nuclear Safety Authority (STUK) conducted 217 inspections of safety-licensed practices in 2019. The inspections resulted in 123 repair orders issued.
A total of 15 700 occupationally exposed workers were subject to individual monitoring in 2019. Nearly 75 000 dose entries were recorded in the Dose Register maintained by STUK.
In 2019, regulatory control of the use of non-ionising radiation (NIR) focused on laser equipment, sunbeds, radio appliances and cosmetic NIR applications. Thirty-one cases of sales or import of dangerous laser devices were found through regulatory control. Eleven on-site inspections of show lasers were conducted. Municipal health protection authorities submitted the details of the inspections of 23 sunbed facilities to STUK for evaluation and decision. In addition to this, 17 sunbed facilities were surveyed on the basis of STUK’s own monitoring.
In metrological activities, national metrological standards were maintained for the calibration of radiation meters used in radiotherapy, radiation protection and X-ray imaging, and the calibration of radon meters used for measuring radon in the air. In measurement comparisons, STUK’s results were clearly within the acceptable range.
Research related to the use of ionising and non-ionising radiation produced new information on, among other things, the exposure of the lens of the worker’s eye and RF radiation. This research also developed the regulatory control of nuclear medicine.
There were 52 radiation safety deviations related to radiation use in 2019. Of these events, 23 concerned the use of radiation in industry and research, 24 the use of radiation in health care, three the use of radiation in veterinary practices and two the use of non-ionising radiation. In addition, 1 862 events and near misses with an estimated minor significance for safety were reported for health care, and five radiation safety deviations were compiled together and reported for industry and research.
In 2019, nearly 11 000 radon measurements at nearly 2 500 workplaces were recorded in the national radon database. At conventional workplaces, the radon concentration exceeded the reference level 300 Bq/m3 at approximately 20 per cent of the measured workplaces.
In 2019, 92 individuals were granted the right to act as radiation safety expert in the field of industrial and research expertise, and 54 persons were granted the right to act as radiation safety expert in the field of nuclear energy. During the six-month transition period, the applications were initially processed by the Advisory Board on Radiation Safety and subsequently by STUK.