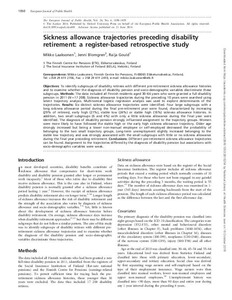 
Laaksonen, Mikko
Blomgren, Jenni
Gould, Raija
Oxford University Press
This publication is copyrighted. You may download, display and print it for Your own personal use. Commercial use is prohibited.
doi:10.1093/eurpub/ckw081
Näytä kaikki kuvailutiedot
Julkaisun pysyvä osoite on
http://urn.fi/URN:NBN:fi-fe2019042413183
European Journal of Public Health : 6

Objectives: To identify subgroups of disability retirees with different pre-retirement sickness allowance histories and to examine whether the diagnosis of disability pension and socio-demographic variables discriminate these subgroups.

Methods: The data included all Finnish residents aged 30–64 years who were granted a full disability pension in 2011 (N = 17 208). Sickness allowance trajectories during the preceding 10 years were searched using latent trajectory analysis. Multinomial logistic regression analysis was used to explore determinants of the trajectories.

Conclusions: Different pre-retirement sickness allowance trajectories can be found. Assignment to the trajectories differed by the diagnosis of disability pension but associations with socio-demographic variables were weak.