Pension contribution level in the United States and Canada 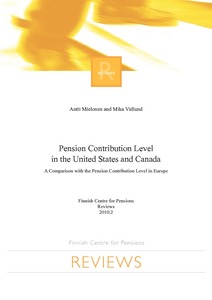 The review presents the total contribution burden caused by the pension provision in the United States and Canada in 2005 when taking into account statutory pension contributions, as well as the contribu-tions to occupational pension schemes, and the government’s share in the funding of pensions. The review is a continuation of the report published in Finnish in 2008 titled Eläkemaksutaso yhdeksässä Euroopan maassa 2005 (The Pension Contribution Level in nine European countries in 2005). The review shows that the pension contribution levels are significantly lower in North America than in the previously reviewed European countries.